The cost of living adjustment, or COLA, is a benefit that ensures your value of money at retirement keeps up with the rate of inflation.

After you retire, you may receive an annual COLA effective in April of each year. Your COLA amount is unique to you and based on:

SCERS has provided annual COLAs to retirees since the 1970s, under a structure authorized under state law and implemented by the Sacramento County Board of Supervisors.

Miscellaneous Tier 1: up to 4%

What are the COLA adjustments for April 2022?

The new benefit amount will be reflected in your monthly payment for April.

Is there a flat rate or a minimum?

No. The COLA provision amounts compound annually and isn’t based on a flat rate each year or a minimum.

How can I see how much my COLA is worth?

The cumulative COLA payment since retirement is displayed on your monthly pay advice, as part of the CPI line (see example).

The annual change in COLA amount will be reflected when comparing the March payment to the April payment.

Please note that SCERS has discontinued mailing individual notices to retirees because the same information is available on the monthly pay advice.

What is the Board of Retirement’s role?

Each year, usually in February, the SCERS Board of Retirement approves the COLA amounts using a formula established by California law. This is an administrative role; the Board does not have the discretion to determine COLA levels outside of the law.

What is the formula?

As outlined in the Government Code section 31870, SCERS uses the “percentage of annual increase or decrease in the cost of living as of January 1st of each year as shown by the current Bureau of Labor Statistics Consumer Price Index for All Urban Consumers for the area in which the county seat is situated.” Further, the amount is rounded “to the nearest one-half of 1 percent.”

SCERS has an established practice of using the Consumer Price Index for All Urban Consumers (CPI-U) for the San Francisco Bay Area region for the COLA process.

Rounded to the nearest one-half of 1 percent, the CPI that SCERS uses for the April 2022 COLA is 3%.

What makes up the CPI?

The COLA methodology is based on the changes in the Consumer Price Index for All Urban Consumers (CPI-U) for the region, as measured by the U.S. Department of Labor’s Bureau of Labor Statistics. The CPI-U represents an average of price changes that consumers pay for goods and services.

The CPI-U is one of many inflation measures. Another index is the CPI for Urban Wage Earners and Clerical Workers, or CPI-W.  Federal law requires CPI-W to calculate Social Security benefits. California state law requires SCERS to use the CPI-U to calculate annual COLAs for retirement benefits.

CPI-U is a more general index and tracks retail prices more useful in reflecting the loss in purchasing power for retirees while CPI-W is geared more toward hourly workers. The CPI-W places a slightly higher weight on food, apparel, transportation, and other goods and services. It places a slightly lower weight than the CPI-U on housing, medical care, and recreation.

The Bureau of Labor Statistics updates the CPI-U for the Bay Area every two months. SCERS tracks how the COLA is trending here.

While there was inflationary growth in Northern California in 2021, the data suggests it was not as high as in other parts of the country. This is likely due to the Bay Area prices generally being higher over a longer period of time, with the rest of the country experiencing a higher pace of inflation to “catch up.”  Since 1982, the CPI-U for the Bay Area has outpaced the CPI-U index for a broader index that includes the Western states. This means the CPI-U for the Bay Area has led to higher cost of living increases, compounded over time, than other CPI indices.  According to the Bureau of Labor Statistics, prices today for the Bay Area are more than 3.09 times (or 309%) the prices back in 1982-84 compared to 2.87 times (or 287%) for the Western states region.

Please note that the CPI-U Bay Area index may not reflect your personal inflation experience or how you spend your money but is a statistical average of many households’ spending patterns. The measure provides a consistent, reliable, and valid method for SCERS to determine the COLA the same way every year. SCERS cannot pick a more favorable CPI index from year to year to influence a different outcome.

The average annual change in the CPI can vary depending on the index. SCERS has an established precedent of using the San Francisco-Oakland-Hayward (Bay Area) CPI-U index, which has generally led to higher cost-of-living adjustments over time than the Western states or U.S. cities indices.

Where can I look for CPI data? 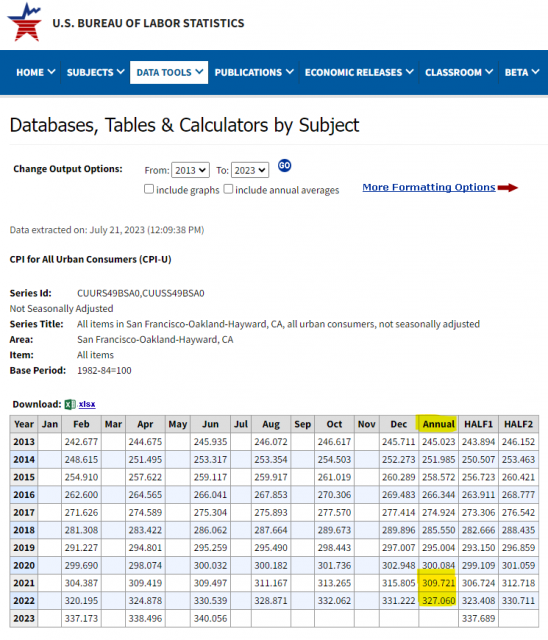 SCERS uses the data points from the “annual” column to calculate the year-over-year change, and not the December-to-December data points. The “annual” data smooths out any spikes or dips that might occur during the year.

Please note that for CPIs that are only published every other month (such as for the San Francisco-Oakland-Hayward area), the BLS includes off-month CPI values that are not published in calculating the annual average.  According to the BLS, “many food and energy prices are collected for the ‘off’ months, and the unpublished ’off-cycle’ indexes are interpolated and used in the annual average.”

As a result, a reader cannot reproduce the annual average shown in the table below because the off-month CPI values used by the BLS in their calculations are not available.

Is there a carryover in cost-of-living that exceeds the maximum COLA amount?

If a change in CPI indicates that inflation is greater than the maximum allowable COLA (for example, 2%), then the excess amount will be placed into what we call the COLA Bank.

How Does the COLA Bank Work?

Let’s use the example of a SCERS retiree who is eligible to receive a 2% maximum COLA each year.

If CPI shows a 3% increase, the maximum of a 2% adjustment can be applied to the payee’s benefit, and the remaining 1% would go into the COLA Bank.

If the CPI for a given year shows less than a 2% increase, and the payee has a positive COLA Bank, SCERS will advance any available percentage to grant the payee the maximum COLA adjustment possible up to the full 2%.

Through the 2010s, the U.S. experienced historically low inflation. As a result, many Tier 1 members with a maximum 4% COLA received higher COLAs than the rate of inflation because of the COLA Bank. Today, the accumulated bank for Tier 1 members who retired after April 1, 1976 is depleted. The bank will not be replenished until CPI exceeds the 4% COLA maximum.

How much is my COLA Bank?

This item appears in